Ok this strays from my 30 Day Challenge, but no fear I am still on the wagon just taking a detour for something I wanted to post. Your regularly scheduled challenges will start again tomorrow.

This is another one of those Soap Box moments. I played this game and I can not stop thinking about it. Brothers: the tale of two sons is bloody remarkable. I have played a few puzzle games that just rocked my world, two I can think of are Limbo and Braid, both of which I absolutely loved their art style and Brothers is no different. Well it is very different, but you get it, it blew my mind.

This game is just wonderful to look at as soon as you start. The colours are bright, the landscapes are dynamic, and the environment feels familiar but so very foreign at the same time. It seems to borrow from a lot of your basic fantasy stuff, trolls, dryders, griffins, but they are also just slightly different. For example instead of an eagle style griffin it is a snowy barn owl.

There are landscapes in this game that, in my opinion, make Skyrim look as remarkable the flat Saskatchewan plains.

There are view points in this game where you have your characters sit on the a bench and it shows you a beautiful horizon. I tried to find as many of these as possible and just absorb the environment. The only scenic view I was not awestruck with is the a view of a snowy ice covered lake, but I am from Canada and we get about 8 months of that crap a year. Just take a look at a couple of these. 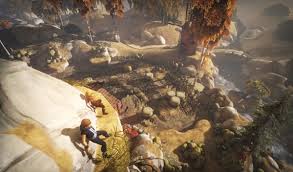 These aren’t cut scenes either just 100% awesome game play. I found myself almost messing up a puzzle while admiring these views. With such bright colours you would not think this would be a very dark game.

Brothers, much like Limbo, is a perfect example of less is more. The base story is there but all the dialogue is just jibberish. There is tone in the words but nothing more than that. The narrative is all in the body language, your perceived actions and what is going on in the game play and it is bloody awesome.

The story is very simple it is just two Brothers searching for a cure for their father after their mother had recently died. It is very much so a game about death and family. It puts you in dire situations and it makes you feel a real sense of accomplishment when you complete a puzzle.

Speaking of the puzzles, one thing that I adored was the reality of not everything goes according to plan. Now I will explain what I mean, in most games you solve the puzzle and it works perfect and nothing goes wrong, in this game sometimes you solve the puzzle but stuff still goes bad. Maybe the cliff you were swinging on gave out and you fall down a water fall but that’s life! Things do not go according to plan and I loved it. It added a sense of urgency where you are thinking “What the hell!? This wasn’t supposed to happen!!”

This isn’t what I had planned!

Now I don’t know how picky you people are going to be about spoilers but HERE IS A SPOILER WARNING there is a point in this game where you dig a grave, have to drag a corpse, and bury it. The tension I felt in that moment I felt like I was actually burying someone and just kept thinking “Why isn’t (s)he getting up? Is this really it?” I don’t think I gave anything away but either way END SPOILER WARNING.

This game is dark, but so bright sometimes you forget it. What I mean is that the art style of the environment is so vibrant that it just doesn’t feel like this beautiful world could be so dark. But it is, it is quite possibly darker than Limbo. At first, while I was playing Brothers I was assuming this game was rated E for everyone (It is only rated T for Teen though). The style seemed accessible for a child and so did the puzzles. Then I walked around a corner and you have to try and save a man from hanging himself, I did not succeed in this. Now I stare at this lifeless corpse under a tree thinking “Shit just got real..”

Then it continued with subtle dark hints around, corpses that don’t quite look like corpses, frozen people and there was the less subtle of the corpses of giants from a battle. Their blood turns entire rivers red. Some of the rivers I am pretty sure were just blood. One of the puzzle involves you just covering yourself in blood.

The controls in this game are right analog stick for the little brother and the left for the older brother and each has their respective trigger as their “action” button. It is a clumsy experience at first trying to control two separate characters, one reviewer explained it as rubbing your tummy and patting your head and that is very accurate. At times your brain might even feel weird trying to do this but it is a very good feeling when you over come these puzzles. 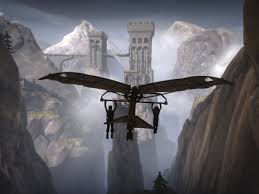 This is where I almost died loving the view

One of the hardest moments I had was when you are trying to swing, catch, release all along these crumbling statues and you have to remember which brother is where, which one do I swing? Who is catching? And your brain just drops them both to their death. The puzzles are fairly simple but dynamic of controlling two separate people makes the puzzles fun and challenging.

In closing this game is fantastic, if you have two working thumbs (and maybe fingers too) and a console, BUY THIS GAME. If you don’t have a console but you have all the poseable digits buy a console then buy this game. If Van Gogh’s sunflower painting can be hung on museum walls someone needs to clear some space to hang this game. It is an amazing experience with emotional impact and mind bending puzzles.

If you don’t think video games are worth while, get your head out of your ass.

Oh yeah I guess I should draw something, here you go. 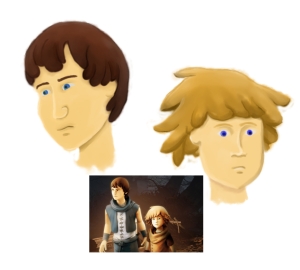